A Short History of the Russell Family 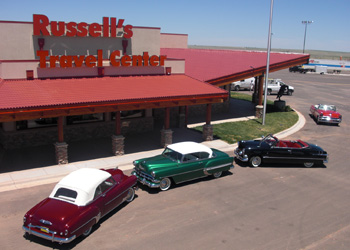 Faith in God and perseverance – the two factors that guided Emory & Barbara Russell to where they are today. With three New Mexico supermarkets, a Russell’s Travel Center on I-25 near Springer, NM, and now a new Russell’s Travel Center complete with a chapel, restaurant, Subway, Tire Shop and an intriguing car museum; their family stands by them ready to take on more challenges. Without the hard work, loyalty, and unity of their family, they doubt they would have been as successful.

Emory was a logger. He and his wife Barbara along with their four children moved to Cimarron, NM in 1964 from Montana so Emory could find work in logging. What the family found, however, was the worst rain and flood conditions since 1902. The family lived in a tent that first summer because there were no living facilities in the town at the time. While driving a lumber truck for the logging camp, Emory twisted his foot and broke it. During his convalescence, he began to take an interest in the hamburger business his wife was running. It was apparent that Emory enjoyed pleasing customers because when the local grocer closed his store to retire, Emory decided to build one as Cimarron did not have a grocery store.

In 1971, Emory opened a new 2,400 square foot store to the Cimarron community, building it himself. The initial inventory for the store was $4,000. Emory and his family believe they owe a great debt to the banker who took a chance lending the money for the business, and felt obligated to make it a success. And they have.

Russell’s Grocery has been remodeled and expanded four times to the present 8,000 square foot store. In 1982, Emory bought and reopened the Columbia Super Market in Las Vegas, NM. Two years later, Emory opened another store in Las Vegas. Super Save; a 15,000 square foot store which once was a discount store. The Russell family bought out several Furr’s and Safeway stores. He always went into each store, took out the liquor, and put bakeries in their place. Their Christian principles are very important to them, and applied to their businesses. In 1995, they sold out 10 of their stores and opened their first truck stop in Springer, NM.

But grocery stores are not the only businesses Emory and his family own. When a business in Cimarron would close, the Russell’s would open it again. The family owned a gas station combined with the grocery store, drive-in restaurant, Laundromat, car wash and game room in Cimarron as well as two subdivisions. “If it’s something that Cimarron needs and we can afford it, then we go for it,” said Emory. “It’s a nice vacation area and we we’re just trying to help the town grow a little bit.”

But Emory admits that there were days when it was so hard, and the family became so discouraged, that he came close to selling just to get out from under it. For years, every cent went back into the business and the work week was seven days and seven nights. Both Emory and his wife gave up a lot for the business, including precious time with their children. They knew it would have to pay off someday. “When my sons started to leave home, they said that they would never work in another grocery store again,” Emory said. “But I wanted them to so they wouldn't have to do what I did.” Starting out in a business today, he adds, is extremely difficult.

Emory attributes his success to a lot of hard work plus trial and error. He adds that this is how he received much of his knowledge about the grocery business; making mistakes and learning from them. “I enjoy the grocery business and meeting lots of people.” He said. And he enjoys servicing them, as well.

Mark, Rusty and Tim Russell work together to make the businesses as successful as their father has. To them, they see the tremendous opportunity Emory and Barbara have provided for them and each has his place in the family business.

This, to the Russell family, has been one of the greatest things about being independents. “Something to proudly pass along to our family with our Christian heritage. We give God the glory for all that he has done. We feel blessed and highly favored.”